Back in March 2016 I found out through the Scottish Ducati Club that a member who had a 1982 Ducati Pantah 500SL that he wanted to sell. He had bought as a pile of bits 3 years previously after some friends had convinced him that they would help him rebuild the bike but of course the necessary help hadn’t materialised. He had realised that rebuilding the bike was beyond his capabilities and he was willing to let it go to a club member who was able and willing to put it back together for the £1350 that he had paid for it three years previously.

I decided it might be a good project to take on and got in touch with the owner who sent me this photo of all the bits laid out. 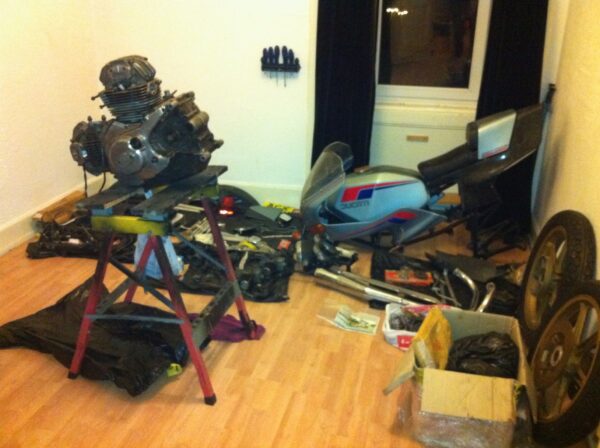 He did say that as far as he knew everything was there, and I could see that at least the engine was still in one bit. The bike had 29,000 miles on it and had one previous owner (who had allegedly been a president of the Manchester Japanese Bike Club!) who had dismantled it to freshen it up and had never got round to putting it back together again. I found out later that it had been laid up in 1987 at only 5 years old.

The current owner turned out to live it Dunoon, not the best place to travel to collect a load of bits of motorcycle. So a few days later my son and I set off to see what I was buying and to hopefully bring it home.

A quick recce seemed to suggest that all the important parts were there and most of it seemed to be in reasonable condition apart from the original exhaust that was mostly rust. With it though was a Conti 2 into 1 system that, although not unused, had been re-chromed to an acceptable finish. There was also a pair new unused YSS rear shocks with 4 way adjustable rebound damping. So the deal was done and, fortunately for me, the frame, engine, tank, seat, fairing, wheels and six boxes of assorted bits all fitted into the back of my Saab estate and we set off for home.

The next day was spent going through all the boxes and checking everything against a downloaded parts list to see what was missing. Amazingly it was all there except for a carburettor banjo, the exhaust pipe collets, the gearbox sprocket retaining plate and a few screws. I was also pleased to see that the speedo read in km/h with mph alongside. So the mileage was actually 29,000 km, which is about 18,000 miles. Not too bad.

First step was to get the frame re-powder coated. It had been done already by the first owner, presumably as a prelude to him rebuilding the bike, but it had been done badly with no primer and bits of rust were poking through in places as it probably sat in a damp shed at some time.  So the frame, swinging arm, centre stand and instrument mount / fairing support all went to Kingsway Koatings to be powder coated. They stripped them back to the bare metal and did a great job, turning it round really quickly, within a week. Unfortunately they had a major fire a few weeks later later but I hear that they are up and running again in new premises.

While the frame was away I checked out the engine taking the heads off to make sure the cylinder bores were OK. I was pleased to see that the Nikasil coatings were perfect and the pistons were moving freely in the bores, which still had some oiliness to them. I did see however that both pistons had come into contact with the inlet valves at some point. On a desmo engine something that could only have been caused by somebody getting the timing marks wrong when replacing the belts.

While the heads were off was an ideal time to give the valve seats a light lap with fine grinding paste then re-shim the valves to get the correct clearances and fit new stem seals. It was at this point I found one of the consequences of valve piston contact. The inlet valves had obviously been bent as both were new and had hardly been run but I found that the inlet valve opener shim on the horizontal head was smaller than the normal sizes at 1.80mm. So it seems that when the valve got bent the valve guide had probably gotten cracked too. The guide had been replaced but the necessary seat cutting had raised the valve in the head, reducing the size of shim needed and Ducati opener shims only go down to 2.00mm, I needed a 1.60mm shim to achieve the correct 0.10mm clearance. No problem Lacey Ducati sell them down to 1.00mm thickness, but the one I needed was out of stock and I had to wait nearly 2 months before I got the shim, as their order from the US was stuck in UK customs for most of that time

The chain guard, rear indicator stem, brake and gear pedals and their linkages were sent off the Classics and Chrome in Hinckley for re-chroming and the paintwork was entrusted to a local paint shop, with decals supplied by Imageworks.

In the meantime I got on with various other jobs, cleaning up the instruments and re-spraying the dash panel, the yokes, the fork legs and the mudguards and overhauling the brakes. The bike had come with a complete set of seals for all the brake callipers and although two of the callipers had good anodised pistons the other had hard chromed pistons that were looking gey flaky. So a new pair of pistons, both master cylinder seals and a front master cylinder cap and rubber gasket were ordered from Gutsibits and the brakes completely rebuilt. The bike had come with a complete set of braided brake lines but they were unsleeved so I fitted them with black heat shrink for a more “classic” look.

The carbs were stripped and cleaned and rebuilt with new float needles and gaskets and seals throughout and of course the missing banjo was replaced. The carb parts and were all bought from Ducati Paddy who has the whole range of Dell’Orto spares and specialises in Classic Italian parts. I also got a new stainless petrol tank cap and a rear brake light banjo bolt switch from Paddy.

A huge amount of stainless fasteners were obtained, mainly off eBay, which I used to replace virtually ever fastener on the bike.

The starter was taken off stripped down and cleaned up, although it turned out to be in pretty good nick internally. This involved removing the LH engine cover to get access to the screw inside the casing. I was a bit pissed off to find out that unlike the later bikes where the screw behind the starter intermediate gear could be accessed through a hole in the gearwheel, on the Pantah this can’t be done and the flywheel had to come off so that the intermediate gear could be removed. 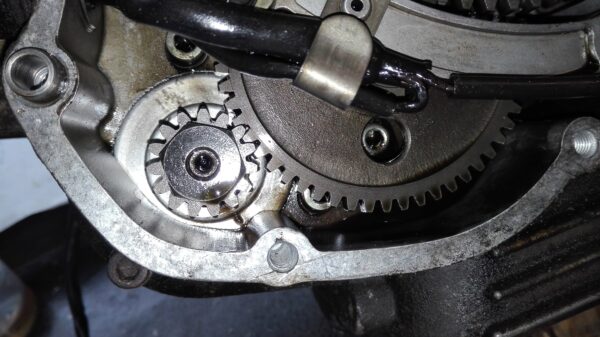 The offending screw is the one lurking behind the teeth. On later models it was moved about 15º degrees anti-clockwise and can be accessed through the hole in the gearwheel. Ducati obviously learned from their mistakes.

I also took off the RH cover and stripped the clutch to check on its condition. It was all good so I put the clutch back together. While I was in there I also replaced the oil seal that maintains the pressure to the crankshaft, it would be daft not to on a 34 year old engine.

I eventually I got the shim for the horizontal cylinder head and got the engine back together with a new set of belts from Mdinaitalia. I was then able bolt the frame onto the engine, fit the front forks and the swinging arm. I found the swinging arm seemed to be missing some shims as it had too much side play but empty beer cans came in handy to make a couple of additional ones. FYI steel cans are 10 thou thick and Coke cans are 4 thou thick. 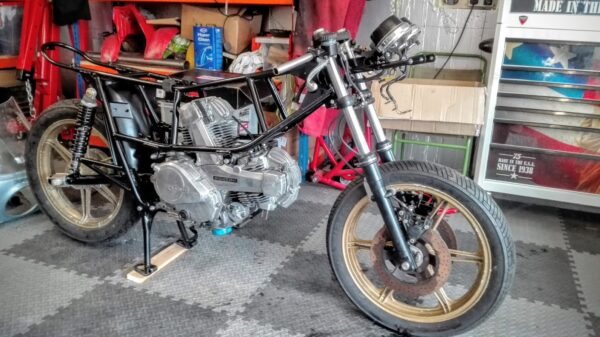 It was at this point that I discovered that the beautiful adjustable YSS shock absorbers were far too long. With the bike on the centre stand the tyre was lifting the stand off the ground, hence the piece of wood in the picture. They measured 350mm between centres and should be 310mm.

Next step was to fit the wiring harness and a modern fuse box with blade fuses instead of the original ceramic ones.

When fitting the wiring I found this – 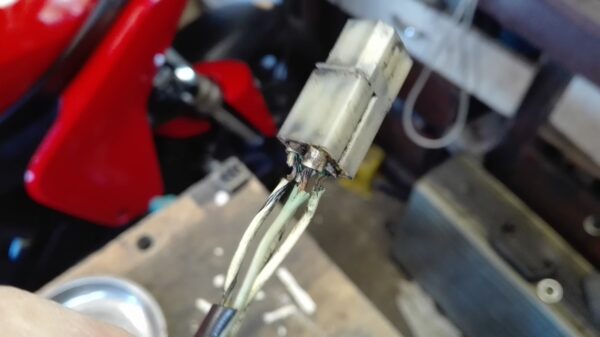 The insulation of the wiring to the connector for the ignition pickups was disintegrating. 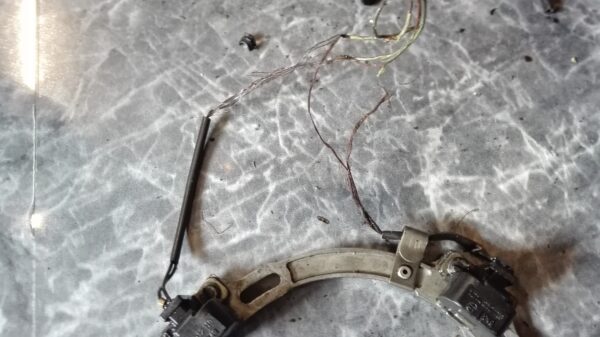 When I removed the pickups from the engine the insulation literally fell off in my hands! 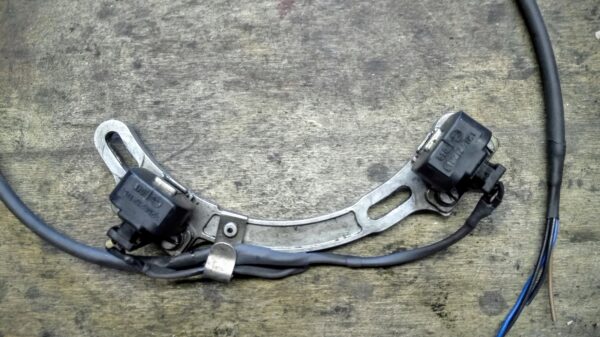 Some fresh wires and a bit of work with a soldering iron and heat shrink had them as good as new.

After the fixing the wiring the exhaust was fitted and new Avon Roadriders mounted on to the wheels, replacing the near 30 year old unused Metzelers that it came with. While the tyres were off the wheels got a fresh coat of gold paint finished with a couple of coats of clear lacquer.

A new battery was fitted and the electrics checked out, everything worked and most importantly there were sparks.

The bits came back from being chromed so they were all fitted along with the new chain, mudguards and rear number plate. The bike was now complete apart from the paintwork that I was still waiting for.

The paintshop had had some difficulties painting the fairing and seat sections. They are from a fairly early period of faired bikes and it seems that they are made from some sort of resin-based material, akin to glass-fibre. The result was that when they were put in the oven to dry the modern paints that were used the resin gave off gases that caused the paint to blister. So it had to be started again and each coat had to be dried out slowly at low temperatures. Eventually though it was all done and I was able to fit it all onto the bike.
I could now put some fuel in it and see if it would run. As soon as I turned the petrol taps on I immediately found that the other carb banjo, the plastic one that came with the bike was cracked and leaking badly. I did manage to get the float bowls filled though and it was very rewarding to hear the engine fire up straight away on pressing the starter. It was difficult to keep running though as the idle mixture needed set. A couple of days later with a new alloy banjo from Ducati Paddy I had it fired up again and after adjusting the pilot mixture and the throttle stops it was running really sweetly.
The final job was to replace the YSS rear shocks with a pair of original fitment Marzocchi Strada units that I’d managed to obtain. After a wee restoration job they are now on the Pantah and that will be the restoration complete. 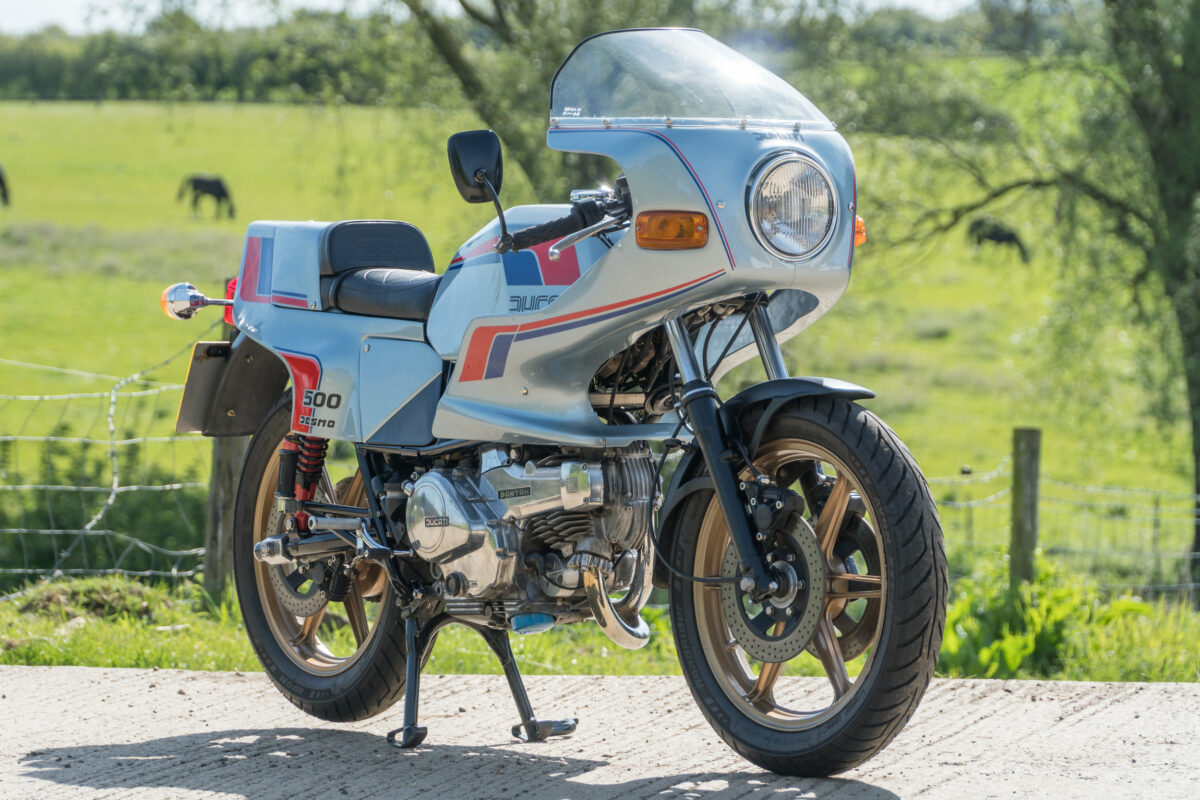 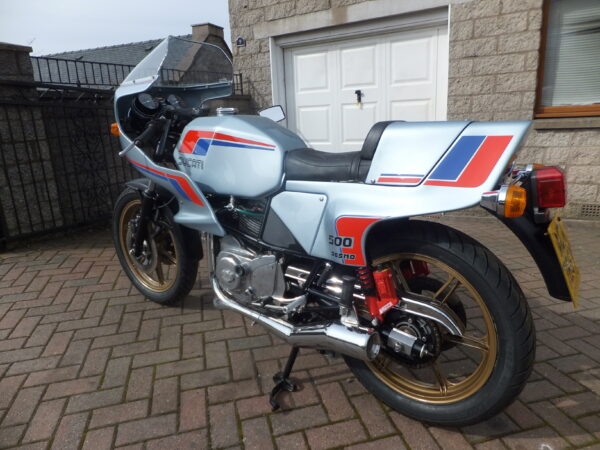 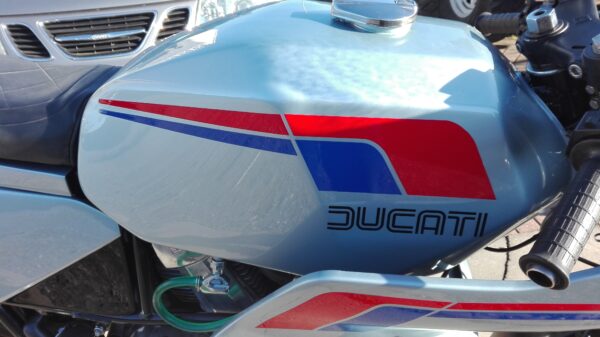 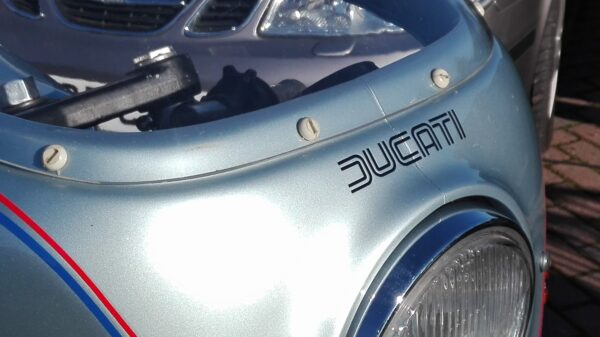 Unfortunately I found that the Pantah was just too uncomfortable for my old body and with a clutch required a grip like Desperate Dan. I just couldn’t get on with it and eventually sold the bike 2019

If anyone is interested, I used the following sources for parts.

The paintwork was done by a local bodyshop in Forfar.